Czech is a West Slavic language spoken by approximately 10 million people in the Czech Republic, a country in the very centre of Europe. This page will introduce the main characteristics of Czech sound patterns, along with sound examples; it will become obvious that in many respects Czech is quite a fascinating language.

Czech has an inventory of 13 vowel phonemes: 10 simple vowels and 3 diphthongs. Vowel length is phonologically distinctive in the language, so the ten simple vowels comprise 5 short and 5 long vowels. Labialization (lip rounding) is not distinctive. Example words (minimal pairs for the vowel length distinction) are given below, accompanied by sound tokens.

As is indicated by the transcription symbols used, there is generally not much qualitative difference between the short and long members of the pairs except for the i-vowels. This is evident from the Czech vocalic space. More details about the formants of Czech vowels can be found here. 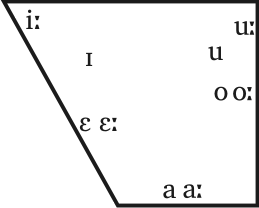 – /ɪ iː/ are front high unrounded vowels, similar to the English vowels in sit and seat; there is a marked qualitative difference between them with /iː/ being realized as more extreme (lower F1 and higher F2) compared to the more open realization of /ɪ/

– /ɛ ɛː/ are front mid unrounded vowels (slightly more open than English [e], but not as open as [æ])

– /u uː/ are back high rounded vowels (like English [uː], but not as fronted); latest evidence suggests that the short /u/ is becoming slightly centralized

In addition, Czech has three diphthongal vowels: /o͡u/ /a͡u/ /ɛ͡u/. These are treated as single indivisible segments, and they do not form length oppositions. All target the close back rounded vowel and start from the point of [o], [a] or [e].

The Czech consonantal system has 26 phonemes, but in total at least 31 speech sounds are commonly found as their realizations. This is partly due to the fact that Czech has a very rich system of regressive voicing assimilation, which applies both within words and across the word boundary. For example, the words /dost/ + /boduː/ would be produced in a sequence as [dozd boduː], „enough points“. In Standard Czech, voicing is assimilated only before obstruents with the exception of /v/; in Moravian Czech, voicing is also assimilated before sonorants. The phoneme /r̝/ is unique in that it undergoes both regressive and progressive assimilation.

Unusual sounds are exemplified in recordings below.

[f v s z ʃ ʒ x ɣ ɦ] – labiodental, alveolar, post-alveolar, velar and laryngeal (glottal) fricatives
note: [ɣ] is only an allophonic variant of the phoneme /x/; unlike in the majority of languages, the laryngeal fricative is voiced in Czech

[r̝ r̝̊] – (post-)alveolar fricative trills
note: [r̝̊] is only an allophonic variant of the phoneme /r̝/; this sound, spelled as ř in Czech, is quite rare across the world’s languages and also difficult to produce – for foreigners and Czechs alike

Word stress in Czech is fixed on the first syllable of the stress group, and it is independent of vowel quality and quantity, as well as the morphological structure of the word:

Lexical stress thus performs mostly the delimitative function, facilitating the segmentation of the stream of speech.

In connected speech, stress on consecutive monosyllabic words is dispreferred. In sentences like šel ven a pil tam víno (he went outside and drank wine there), stress would therefore rarely fall on all lexical words, and we would expect a realization such as the following: [ʃɛl ˈvɛn ǀ ʔa ˈpɪl tam ˈviːno ǁ].

Monosyllabic words, especially grammatical ones, thus often function as clitics: byl bych s ním zůstal (I would have stayed with him) will be typically pronounced as [ˈbɪl bɪx s ɲiːm ˈzuːstal]; jsi nemocný? (are you ill?) as [jsɪ ˈnɛmot͡sniː ǁ]

Interestingly, phrases with monosylabic prepositions are usually (but not exclusively) stressed on the preposition, not on the following lexical word: po obědě půjdeme na procházku do parku (after lunch we will go for a walk into the park) [ˈpo ʔobjɛɟɛ ˈpuːjdɛmɛ ˈna proxaːsku ˈdo parku ǁ]

The acoustic manifestation of Czech lexical stress is very interesting. Unlike in many languages, the stressed syllable is not associated with typical signs of prominence. Unstressed syllables are often higher, louder and longer than stressed ones. More specifically, it seems to be the post-stressed syllable which tends to be, speaking strictly objectively (acoustically), more prominent. Research indicates that what is essential for the perception of stress in Czech is not the prominence of the stressed syllable but, rather, a specific trajectory of acoustic qualities throughout the stress group. This trajectory can be characterized as delayed rise, L*+H.

The following example shows a short sentence taken from spontaneous speech: Když jsem zase začal, myslel jsem, že koleno si odpočinulo. (When I started again, I thought the knee had rested.) Stress group boundaries are indicated by dashed lines, the smoothed F0 contour is shown, for the sake of simplicity, only in the vocalic nuclei (in blue).

Regarding speech rhythm, Czech has traditionally been described as a language in which the syllable-timed principle is more dominant.

For example, the falling conclusive tone is, increasingly more often, realized with a rising-falling movement. The realization used to be regarded as emphatic, but has recently become, at least in most speech styles, unmarked. A comparison is provided using the phrase není právně závazný (is not legally binding).

Similarly, the rising conclusive tone is also frequently implemented as a rising-falling contour, as shown by the following two examples of the question Máš už napsanou úlohu? (Have you written your task yet?)

It should also be noted that the intonation of ordinary spontaneous Czech is quite flat; when speaking in foreign languages, Czech speakers therefore often come off as bored or disinterested. This “flatness” concerns not only the low pitch range, but also the quite low number of tone units per utterance. We illustrate the frequent absence of significant pitch movements on the following utterance.